Welcome to the salmon capital of the world! The visit to Ketchikan directed us to the Tongass Forest with the Totem Bight State Park, the Southeast Alaska Discovery Center and the historical downtown with Creek Street and Thomas Historic District. All main tourist attractions are walking distance from the docks with the exception of the Totem Bight Park (check my tips below). 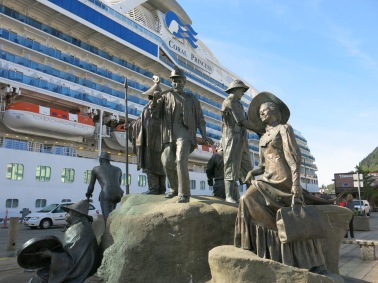 The Totem Bight State Park starts with a quick walk in the forest to arrive in a grounds overviewing the ocean. The place was quiet and peaceful in this early morning as we looked over the 14 different totems positioned in a circle.

This clan house is representative of what was built in native villages in the early 19th century. This space was shared by several families, hosting between 20 and 50 people. You may notice that there are no windows, only a narrow doorway. Indeed, the common fire at the center of the room served both as light and heat. Families gather during the winter season as in late spring and summer they moved to resourceful areas for collecting food, hunting, fishing … 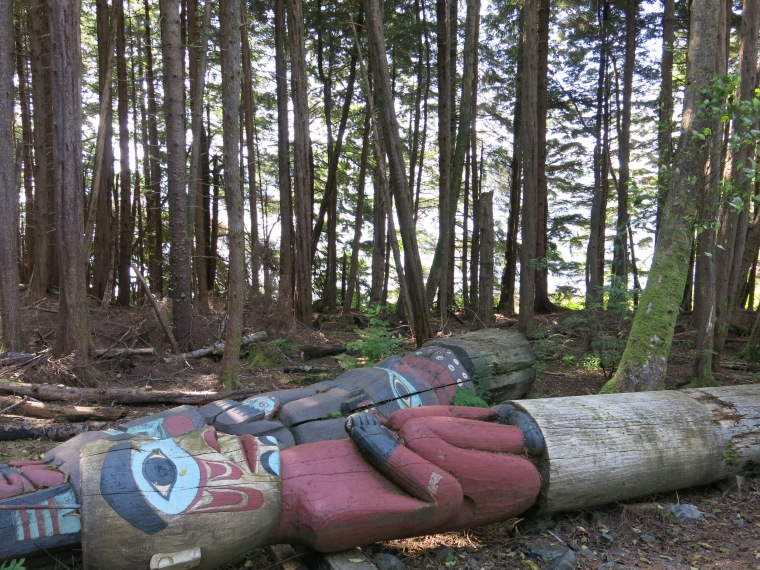 Passing by the restoration building, we noticed some totem lying on the ground. Traditionally, when totem fall they are not removed, they stay there to return to the earth. In the meantime, a new totem is carved to stand in their place. This is the continuing cycle of life and tradition.

There are different types of totem: some were houses posts and poles, others were recording history or family stories, or even homage to dead people.

Totem poles tell a story and numerous symbols of animals are used. Among them, you’ll find the raven considered the symbol of the Creator, the eagle (peace and friendship), and killer whale (strength).

The totem above is named “Man wearing a bear hat.” It represents a man of the Bear Clan wearing a hat with painted whales. A bear’s head is at the top. 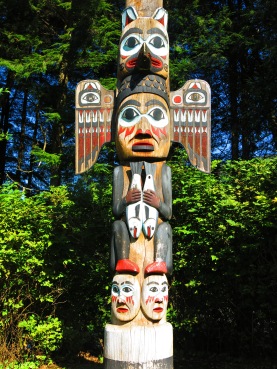 Totems are really colorful but limited to a few colors: black, red, blue and green.

Indeed, the color comes from natural pigment made from salmon eggs and minerals. It was labor intensive for women to prepare theses colors. They chewed and spat out salmon eggs to prepare the base, then mixed it with colored powders (black from charcoal, red from iron, turquoise from copper oxide and white from shells). 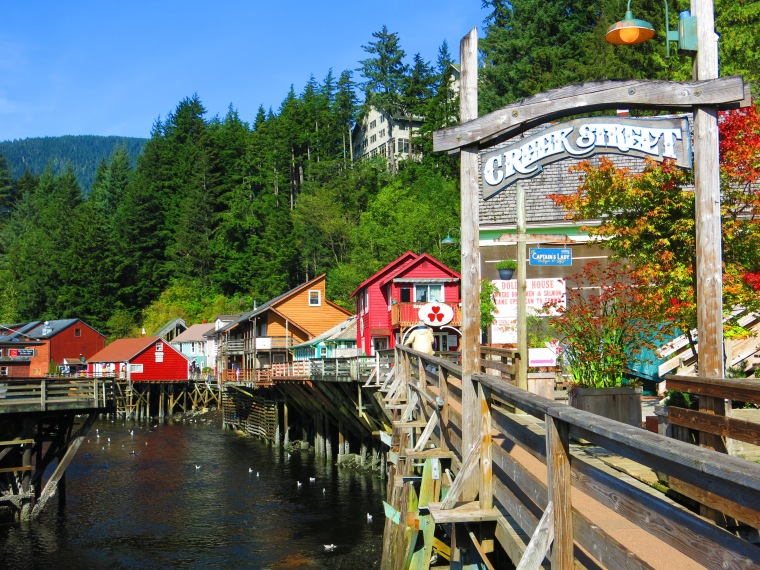 Our day continued on Creek Street, the historic boardwalk. Well known, back in the days, as the Red Light district, it hosted more than 30 brothels! This business flourished between 1900 and 1954 along with the development of the city. Nowadays, these houses have been restored and converted to tourists shops, restaurants and art centers. 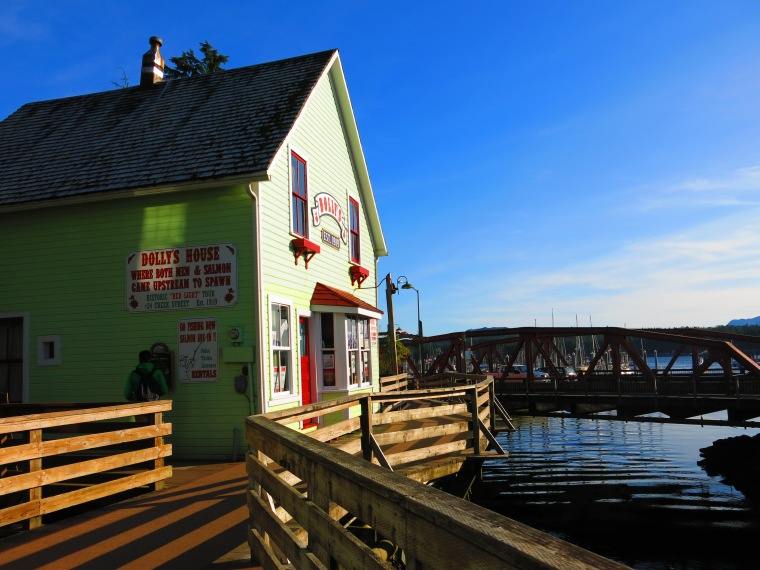 One of the most famous houses on Creek street is Dolly’s House. Dolly, born as Thelma Copeland in 1888, arrived in Ketchikan in her twenties. Quickly she bought this house and prospered becoming the most successful madam in town. An undeniable businesswoman, she charged $3.00 per man while the average worker made $1.00 per day. She retired at 72. In the present day, the house has been transformed into a museum ($10 entrance fees) where furnishing and souvenirs have been preserved.

Lumberjack show is another tourist attraction in Ketchikan. A few times per day this shop hosts, in its inside courtyard, a 50-foot tree climb, axe-throwing, log-rolling, springboard-chopping, and buck-sawing. Unfortunately, we didn’t attempt this show, next time for sure!

View from the Marina

Nearby the Lumberjack show we admired this view of the Thomas Basin Marina with the Deer Mountain in the background. We walked on this waterfront looking at the boats coming back from sea fishing. 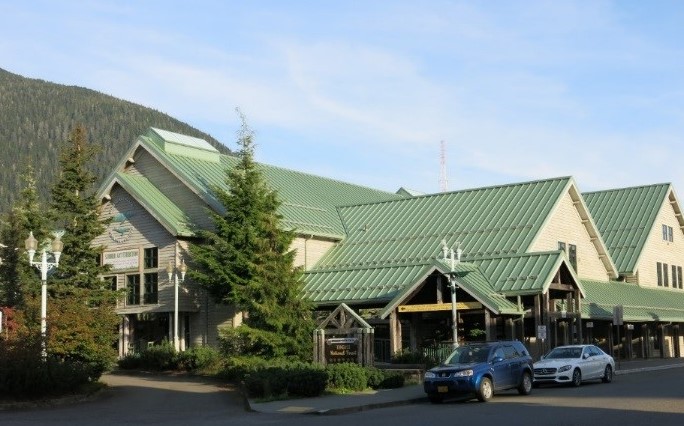 This museum, built in the cannery style, spotlighted the natural and cultural history of the Tongass National Forest. It was a perfect complement to the Totem Bright Park to comprehend and appreciate native life. We also learned more about Alaska history, wildlife, and natural environment. I highly recommend it!

Walking downtown will let you enjoyed different totems. The one above is located at the Whale Park. It is a replica of the Chief Kyan Totem pole carved in 1964.

Across the street from the Chief Kyan Totem pole, we discovered the oldest standing church built in 1903: the Saint John’s Episcopal Church. It was closed when we passed by but, if you are luckier than us, you can visit the interior built with red cedar.

In addition to being the salmon capital of the world, Ketchikan’s area held five different species of wild Pacific Salmon. Looking over bridges, it is usual to observe salmon swimming uphill. Actually, toward the end of their life, salmons come back to rivers to reproduce and to die. Guess what? This salmon art statue is the only salmon we saw during our day in the city!

The day was going to its end, bringing this nice and warm color over the town. Located south of Ketchikan Creek, Thomas district welcomed multicultural communities. Attracted by the economic opportunities from the fishing industry, numerous Japanese, Chinese, Koreans and Philippinos settled there along with Native Americans. While walking on Stedman Street, we observed old and renovated shops that they previously owned and operated. If you continue, you will arrive on Thomas Street, a wood-plank street built over the water. The union machine shop and the Potlach bar are the remaining businesses from this period.

We only enjoyed a portion of what the city has to offer but still, our day was rich in cultural and historical discoveries.

3 thoughts on “Ketchikan, the Salmon Capital of the World”