Pierre the photographer and Gilles the painters met at a party in 1976. Since then, this artist duo portraits musicians. This exhibit explores their universe via their relationship to music. Here is a look at “Pierre et Gilles, Idols Factory”

Pierre and Gilles have been collaborated with young artists and international stars, from pop to hard rock, for more than forty years.

Inspired by the artist’s background and song lyrics, each representation tells a story. 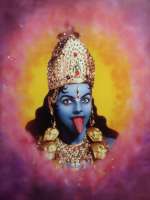 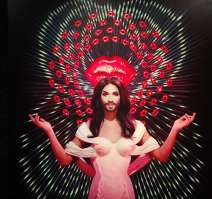 This universe is a colorful mix of reality and fantasy. Pierre is taking the picture while Gilles embellishes it. Embark for a poetic stroll listening to songs associated with each portrait. I particularly enjoyed French music from the 80s and 90s. It was a delightful throwback to my younger years 😉

This altar of music is inspired by Pierre and Gilles’ art studio. Their imaginary world includes a television displaying video clips from the ’80s as well as numerous musicians’ relics like figurines and autographs. 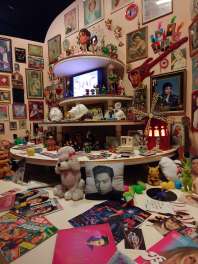 Many musicians are represented as biblical figures. Inspired by their Catholic culture from childhood, Pierre and Gilles’ models are turned into icons.