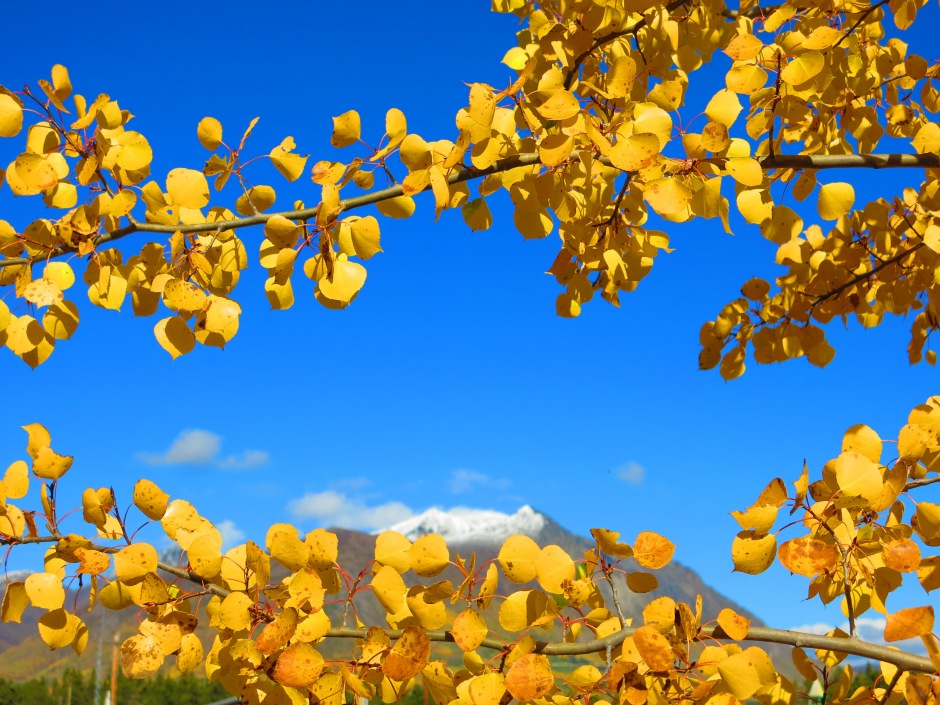 Have you ever imagined to be transplanted into a postal card? You definitely will at the end of this article. The discovery of the Yukon Road transported us into the heart of beautiful Mother Nature. Our road adventure along the scenic White Pass and Yukon route led us from Skagway to the Carcross desert and Emerald lake from the U.S.A. to Canada (both British Columbia and Yukon). Mid-September trees were shifting to yellow and red color adding the sumptuous touch on the palette of colors. Each loop of the road reveals splendid landscapes. Follow me on this wonderful journey! 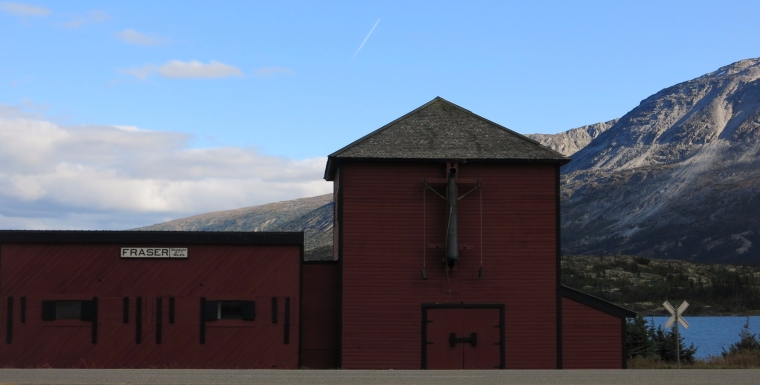 Approximately 23 miles from Skagway, we arrived at Fraser Post of the Canada Customs. This water tower is just before the post. It was in function when steam locomotives were used between Whitehorse and Skagway. 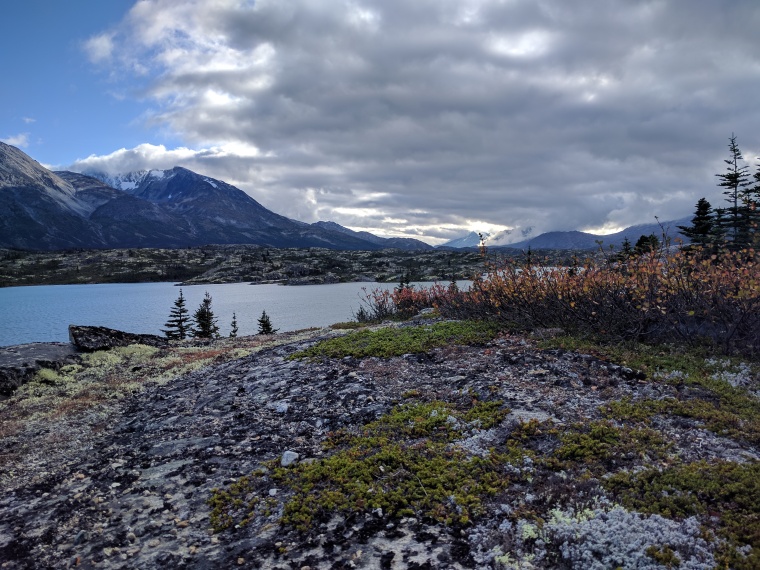 Just a few miles from Fraser, we discovered a rugged wilderness landscape. We were suddenly propulsed into a science-fiction set. The silence was only interrupted by the tormented winds. I didn’t even catch a noise from natural wildlife, even birds. Boo! 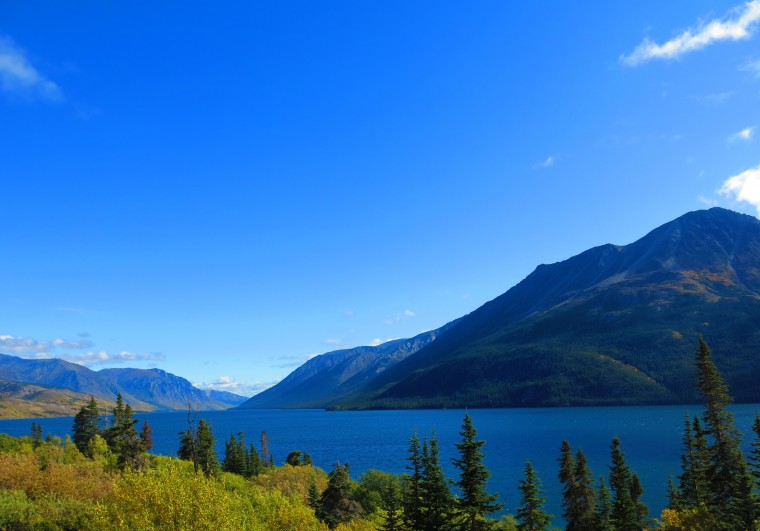 As we continued nature completely transformed from roughness to smoothness as we approached and drove by Tutshi Lake. What a contrast in only a few miles! The landscape was now covered by colorful trees marrying the intense blue from the lake and the sky. 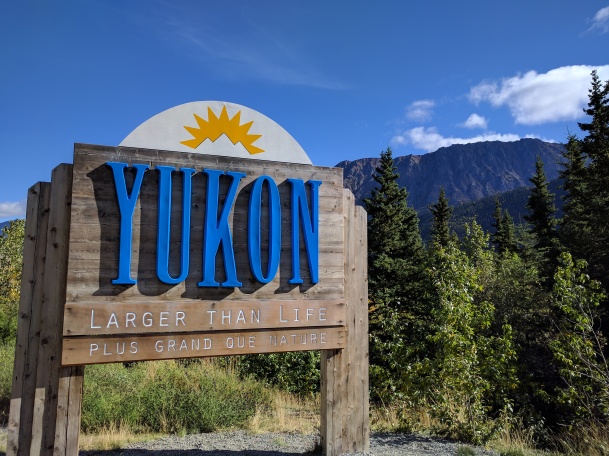 This big sign “Yukon, larger than life” welcomed us as we left British Columbia and its tormented valley. Yukon comes from the Gwich’in word “Yuk-un-ah” which means “great river.” 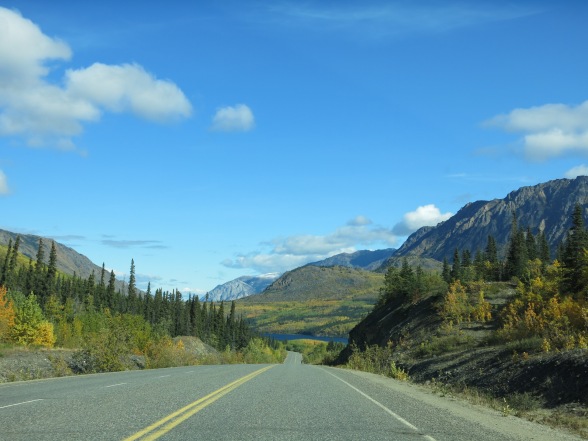 Just after the Yukon sign, our journey continued inside this landscape. Can you notice the royal blue color sign of the Tutshi Lake in the background? 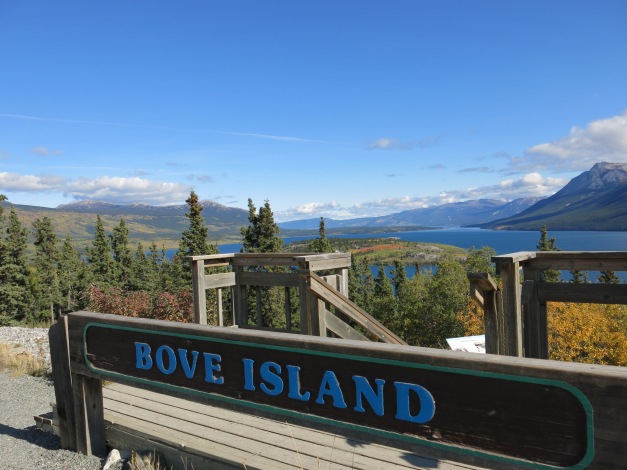 In between Nares Lakes and Windy Arm Lake, Bove island is appearing. It was named after Lt. Giacomo Bove, an officer of the Royal Navy who was a famous explorer. Natives Nations probably called it differently. As many others places, Lt. Frederick Schwatka, who was mapping the routes, labeled them accordingly to people he admired. 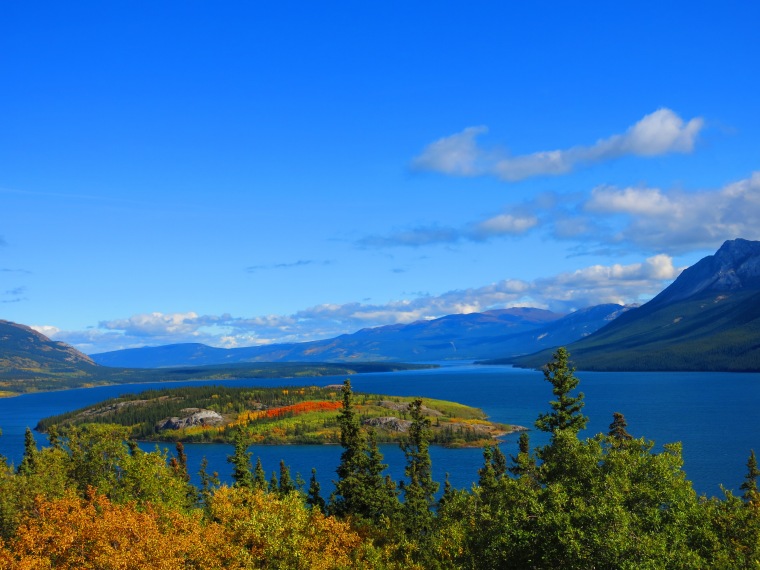 During the Gold Rush, Bove Island was dangerous at the time because of the contrast of the calm Nares Lake and the windy Windy Arm. As a consequence, many boats wrecked there. Difficult to believe when you look at this peaceful photography. 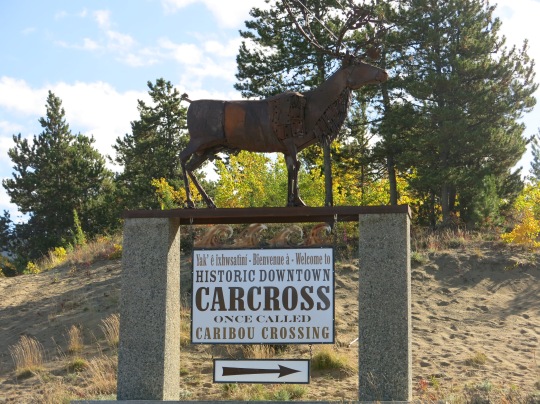 Carcross was originally called caribou crossing by prospectors. Indeed, twice a year, large herds of caribou reached this junction point between Bennett and Nares lakes during their migration. The city was renamed Carcross in 1902 with the support of Bishop Bompas who was frustrated to not receive mail (other Caribou crossing cities existed in British Columbia and Alaska). 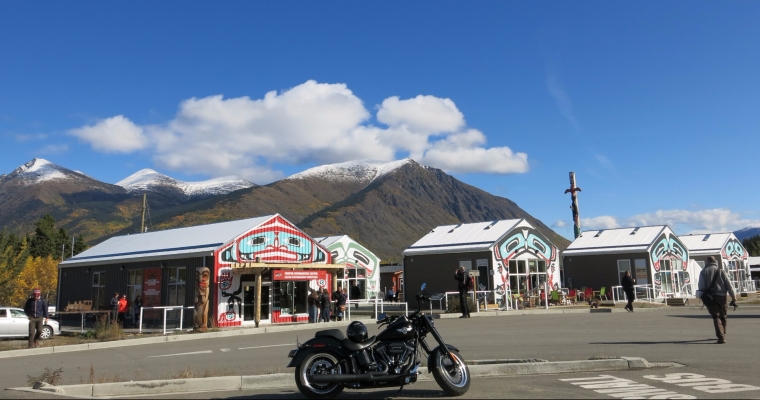 Welcome to one of the oldest communities of the Yukon, Carcross! These painted buildings are hosting the visitor center, shops, and restaurants. A lot of tourists are coming by rail or bus. We stopped there for a pleasant lunch before walking in town. 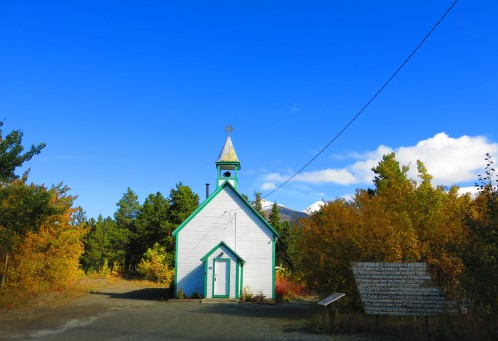 A few steps from the visitor center, there is the Saint Saviour’s Anglican Church. This church was built in 1904 and operated by Bishop Bompas. Sunday services are still held there. The big white sign on the right gives more historic highlight dates on it. 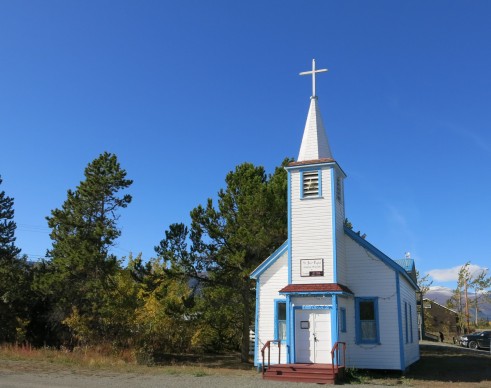 Located one block north of Matthew General store, you will find St. John the Baptist Church. This church was relocated from Conrad City in 1940. 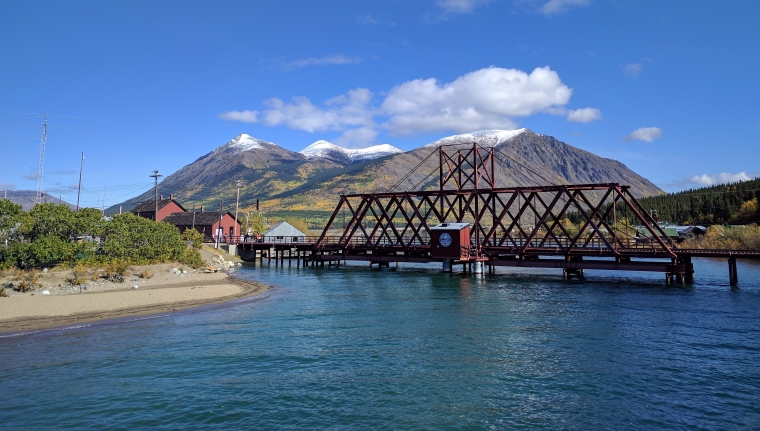 The railway connected Skagway to Whitehorse, capital of Yukon in 1899. At the time, its construction was really challenging due to the rocky and steep terrain. The road from Skagway is obstructed by a  2,865 feet mountain. 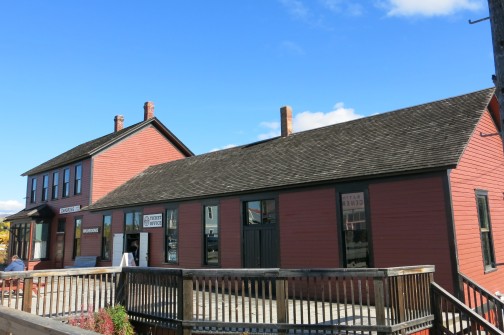 This depot was built in 1910 and was in service until 1982. The service has been reinstated years later with the booming of modern tourism. 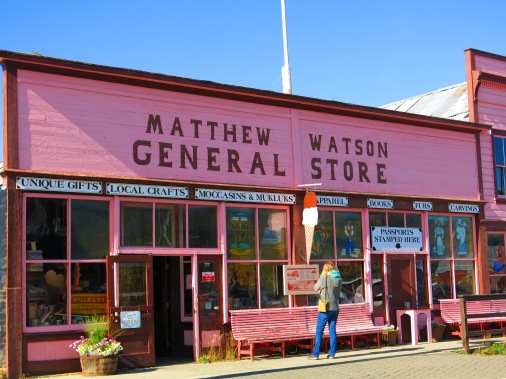 Across the street from the depot, Caribou Hotel and Matthew General Store are standing. This latest is the oldest operating store in Carcross. Inside, you will find souvenirs and a food section serving snacks and ice cream. 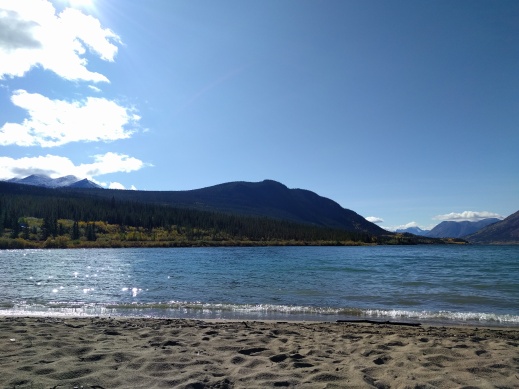 After Matthew’s general store, we continued on Bennett Avenue and passed the post office. Quickly after, on the left, we followed a small path leading us to the beach facing Bennett Lake. It was really tempting to lay down and swim in this clear and (very) fresh water. 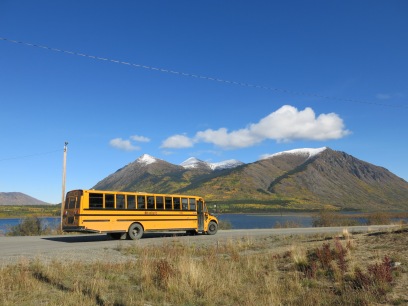 Carcross remains a small city (less than 500 inhabitants). Here is a school bus taking kids back home with the Nares lake in the background. 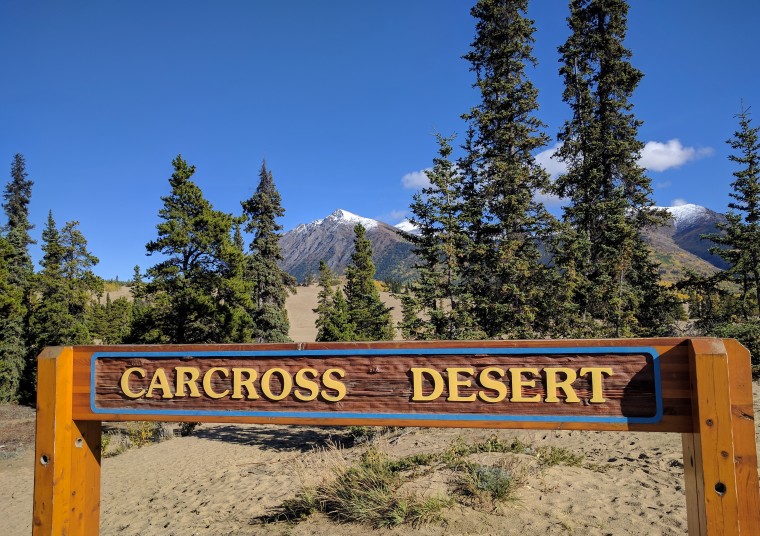 Just after Carcross City, we stopped at Carcross desert also known as the World’s smallest desert (260 hectares). It’s very surprising to find sand dunes in the middle of the Canadian forest. Well, technically it is not a desert because it is not hot dry climate. This is the result of an ancient glacier. The story started 10,000 years ago when the ice melted creating glacial lakes. Sand and silt trapped in the glacier settled at the bottom of the lakes and when they disappeared the sand remained to create this unique landscape. Nowadays this dynamic dune system is supplied by the nearby Lake Bennett as the strong wind brings the sand ashore. 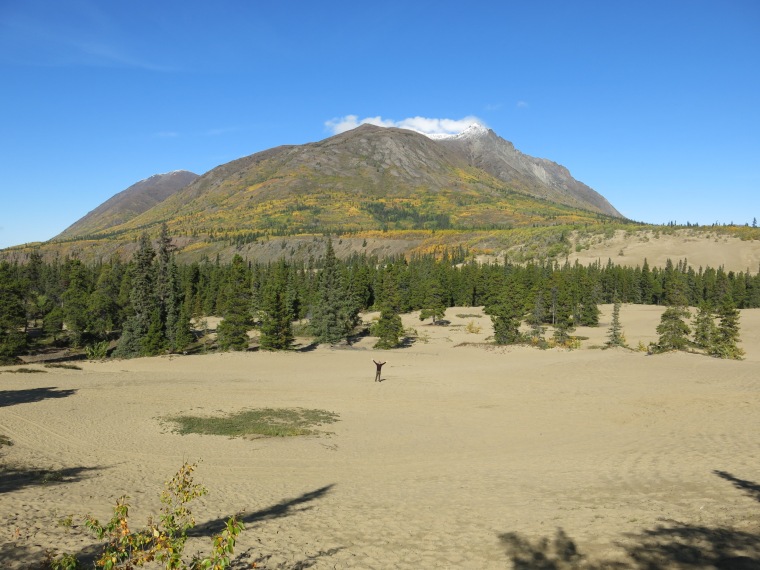 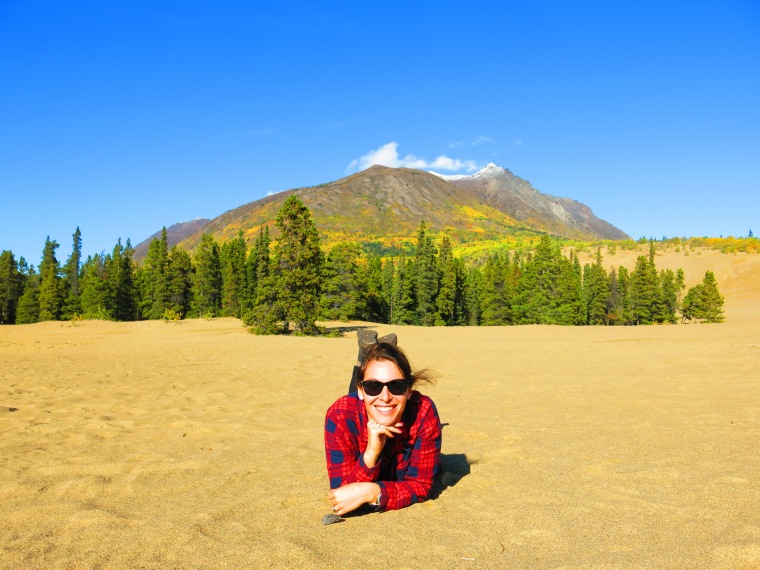 Emerald Lake – The Jewel of the Yukon 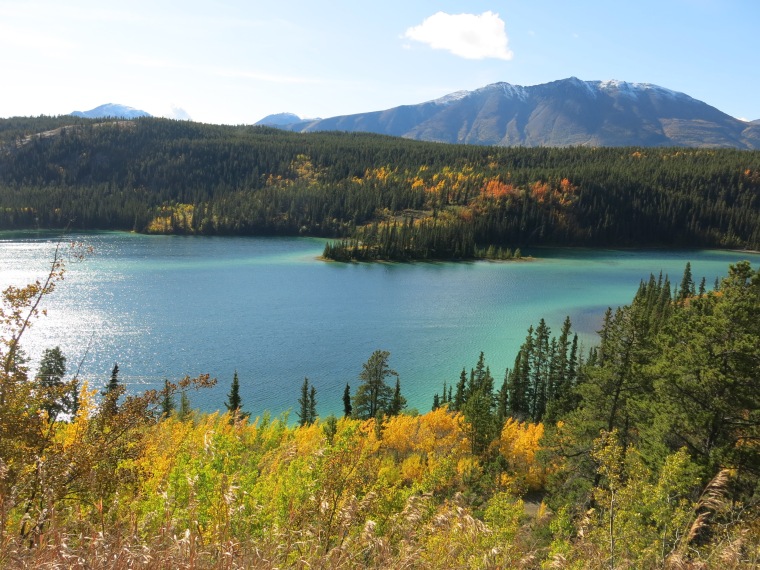 A few miles north of Carcross desert, Emerald Lake was our turn around point. The blue-green color is a chemistry effect from the sunlight reflecting off a white layer of marl (white calcium carbonate). Just unbelievable! We contemplated it in silence, totally absorbed and stunned by such a beauty. Undoubtedly we find our jewel of the Yukon during our golden rush day. 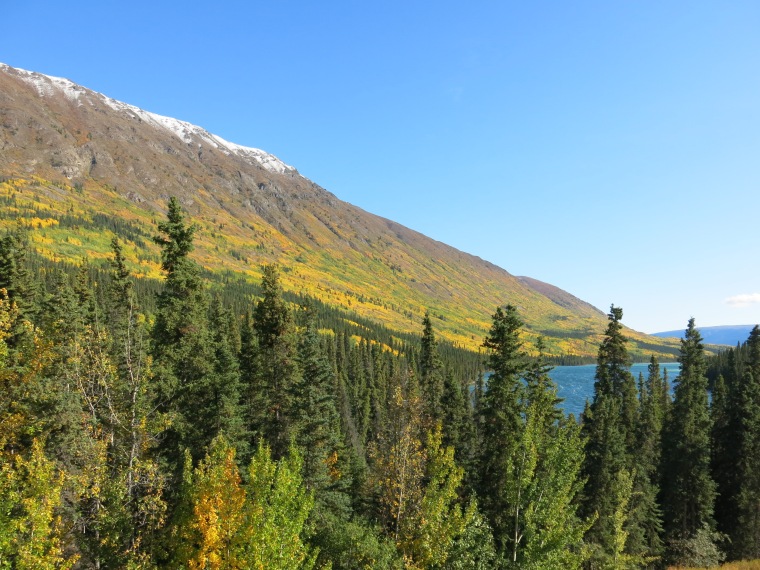 Welcome (back) to Alaska 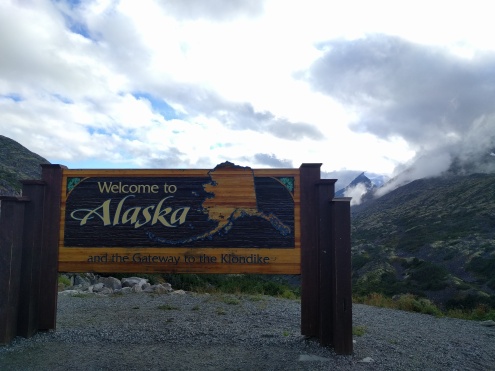 We are leaving Canada, entering Alaska territories, crossing the 2,865 summit and getting closer to the U.S custom. This is called the White Pass.

Did you enjoy this Yukon road trip?