The legend of Rome’s foundation started at the Palatino, one of the city’s seven hills. Supposedly, twins Romulus and Remus, rescued by a female wolf, were nursed in the Palatine’s cave. From there, Romulus laid the first stone of the city, and later on, Emperors built their imperial residences. Nowadays, luxurious vegetation flourishes from the historic vestiges.

Let’s navigate on the heights and discover the main sights on the Palatine: the house of Augustus, the Flavian Palace, and the Farnese Gardens.

Romans Emperors walked there! How unbelievable to walk on the same stones and paths as them as we followed the Via Sacra (sacred way), the main street of ancient Rome, to enter the Palatine Hills.

Among its vast lush green vegetation, palaces of the Roman periods remains on these heights. This peaceful and refreshing area is perfect to escape the crowd of tourists as well as the heat of summer days.

I really enjoy meander in the Palatino and, like an archaeologist, looking for the ancient vestiges.

Augustus commissioned a large complex composed by a sanctuary including a temple of Appollo, a private and a state residence. He liked this place due to its proximity with Romulus’s original home (one of Rome’s founder). 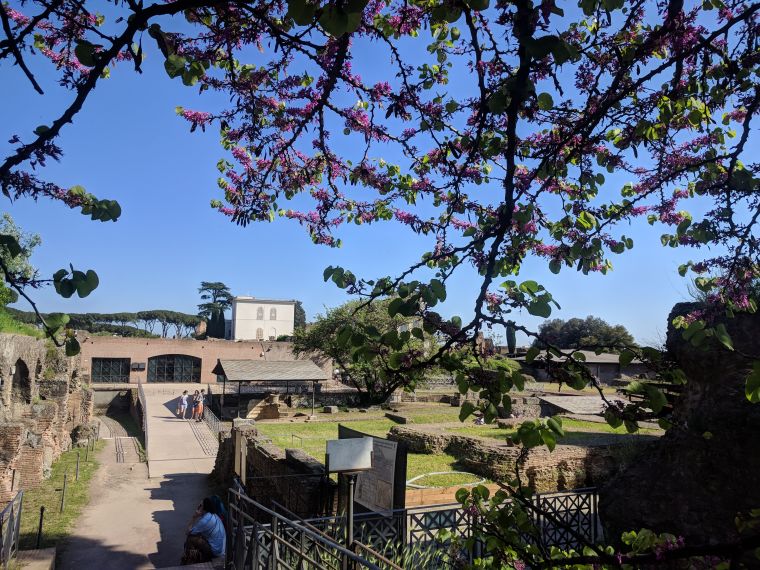 This two-level complex was the private residence of the Emperors. Built-in 92 AD, its name, Domus Augustana, refers to the “August” emperor. The picture below is the remains of a large fountain surrounded by small basins and flowers beds. This open-air courtyard was probably a refreshing nestle during summer time.

Nearby the Domus Augustana is the public residence of the Emperors, the Domus Flavia. The picture below is showing (with a little bit of imagination 😉 ) a sculptural fountain at the center of this porticoed courtyard.

Afraid of ambush, the peristyle was elaborated with reflecting precious marble to allow Dominitian to see behind his back. 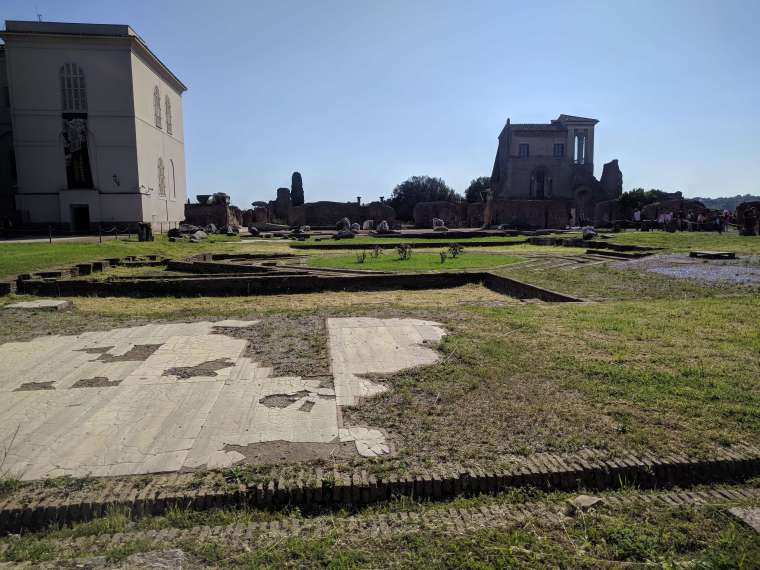 Adjacent to the Domus Augustana is the Dominitian’s Stadio. From above, the Hippodrome is impressive. This 500 foot long (160*48m) “stadium” was a garden (viridarium) and probably a track for exercising horses. Surrounded by a portico, the central part was a large curved path for strolling on foot or with a carriage.

Grandson of Pope Paul III, Cardinal Alessandro Farnese acquired parcels on the Palatine Hills in 1550. Along with his summer residence, he created a botanical garden, on Domus Tiberiana ground’s, ruins of Emperor Tiberius’s palace. Over the years, Cardinal Alessandro gathered a large variety of plants and species. This renaissance garden became the 1st botanical garden in Europe.

One thought on “Palatino: a luxurious and luxuriant escapade in the hills”